Handprints are unique; each has their own fingerprint patterns, lines, and size. Each handprint on that wall represents a unique person … someone from a unique background, pursuing their own unique passion. Leaving your handprint somewhere is synonymous to leaving your mark or legacy. That may seem like a bold or melodramatic statement for covering your hand in purple acrylic paint and touching the basement wall of your freshman dorm, but hang on, I’ll explain. Our unique backgrounds somehow all lead us here, to Vanderbilt University, but specifically to East House. There’s a special bond that occurs as a result of learning and exploring freshmen year together.
These hands belong to people who are always learning and creating. East residents are researchers, members of a variety of different academic organizations, and people who engage with faculty, like our Head of House Dr. Seymore, outside the classroom at events like our Bachelor viewing parties and the weekly Thoughts and Snacks house event.
These hands belong to people who are committed to actively engaging in communities across campus. They have thrown up an “anchor down”, helped set up for a function, and clapped enthusiastically as they attended an athletic event.
These hands belong to people who know the importance of self care. They have applied face masks at our stress relEAST event, dialed the number of an RA to seek help, and knocked on the doors of other members of their community to check in and engage in dialogue about healthy living.
These hands belong to people who are committed to celebrating the diverse community they are a part of. They have scrolled through the house groupme, stopping as they saw an cultural showcase event a housemate was in and decided to go (learning more than they were expecting), gone on ASB and helped people who are not as privileged as they are, and hugged someone with a very different identity than them after an insightful, intentional conversation.
These hands represent people who have learned a lot about themselves this year. They have registered for their first absentee ballot, researched an issue to find out their personal stance, and sought out campus resources for personal well-being.
I thought it was interesting to look at the wall and know that so much diversity is present, but how you couldn’t tell what identities a person has just by looking at their hand print. It is, thus, an equalizer and a representation that we are all very different, but share a common identity: a member of East House. These hands represent a diverse community of people who grew alongside and learned from each other. To quote High School Musical, just like we were “all in [it] together” this year, so are our handprints … all up there together on that wall.

It’s the final episode of the CommonsCast for the 2018-19 academic year. Dean Melchor-Barz delivers one last Dean’s Minute, and Zoe has a very special guest for her final Humans of the Commons interview.

On this episode Dean Melchor-Barz reflects on all the “stuff” we’ve learned this year, Zoe delivers the Commons Calendar of events for the week, and she has a great interview with Noah Barboza, President of Memorial House.

In this episode Dean Melchor-Barz implores us to take time to stop and notice the flowers, Zoe delivers the Commons Calendar of events for the week, and she also has a great interview with Dr. Chalene Helmuth, Faculty Head of Sutherland House.

“Elect Her” will be coming to Vanderbilt on Sunday, March 31, thanks to a recently passed resolution by Peabody College Senator Katherine Petosa and Vanderbilt Student Government.

First-year Senator Hannah Bruns said, “It is so important that our organizations on campus reflect the student population. Often times women can feel like they don’t have the tools to run a campaign, so we hope that Elect Her will help women on campus run successful campaigns to increase female representation in different organizations.”

At the workshop, run by Senator Katrina Robinson of the Tennessee State Senate, participants will have the opportunity to:

Though Elect Her is an organization that focuses on women’s leadership, it fosters an environment that is inclusive of people across identities, including gender expression and identity, sex, sexuality, race, ethnicity, national origin, first language, ability, age, religion, party, socioeconomic status, and more. 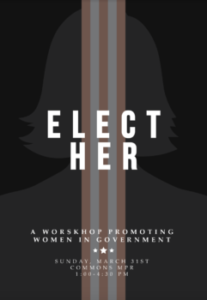 On this episode Dean Melchor-Barz begins reflecting on everything learned during our first-year experience, Zoe delivers the Commons Calendar of events, and she has a great interview with Traci Ray, Director of Residential Education, Office of the Dean of Students

This episode features Dean Melchor-Barz sharing some thoughts on honesty and integrity in light of the recent college admissions scandal, Zoe delivers the weekly events in the Commons Calendar, and she has a wonderful interview with Dr. Catherine McTamaney, Faculty Head of Crawford House.

Zoe welcomes you all back from break with a full slate of events coming up on campus, including house events, free t-shirts for lacrosse fans, and the International Fashion Show.

On this edition of the podcast Dean Melchor-Barz talks about his recent “smile experiment”, Zoe presents the weekly calendar of upcoming events and she has a great follow up interview with Carolyn Floyd, the Associate Director of the Office of Immersion Resources.

It’s the pre-spring break edition of the CommonsCast! On this episode Dean Melchor-Barz talks about Alternative Spring Break and the roots of ASB at Vanderbilt, Zoe has a brief calendar of events, and she has a great interview with Dr. Christoph Zeller, the Faculty Head of West House.