Cortez has a wide ranging conversation with Dr. Alyssa Hasty, the faculty head of house at the Murray House on The Commons at Vanderbilt. Dr. Hasty is a professor and the director of graduate studies in the Department of Molecular Physiology and Biophysics.

Imagine: It’s the fourth quarter on Thursday night. It’s third and goal, and the Commodores are down by three. The lights seem to glare down on the field, illuminating South Carolina’s defensive line, and the stands quiet in anticipation. The snap—Kyle Shurmur hands it off to Ralph Webb, who charges through the wall of garnet and black into the end zone. Touchdown! With mere minutes left to the game, the Commodores have secured victory over the Gamecocks to kick off the season, and the crowd goes wild! Excitement running high at the final whistle, Vandy fans celebrate by …

I’ll say it again, a little differently this time: under no circumstances are SEC students to rush the field during ANY SEC game.

While this rule may seem disappointing to zealous supporters of black and gold, the reason is for the safety of fans, players, and staff. Many students have been trampled or injured in the past when students have rushed the field, and in response, the SEC is cracking down on this behavior. The rule is set in place for the fans’ safety. The first time a university’s students break this rule, the institution will be fined $50,000. For the second offense, $100,000. For the third offense, the institution will be fined $250,000, which is exactly how much Vanderbilt University will owe if its students rush the field on Thursday or during any other SEC game in any sport.

Rushing the field is simply not worth the consequences; people get hurt, the universities get fined, and in some cases, fans have lost ticket privileges. All in all, there are much better ways to celebrate, on which this list will shed some light.

If you’re not yelling, then why are you at a football game? Show some love for the players by shouting and chanting as loud as you can both to boost morale and release some of that energy from watching our ‘Dores at work. One classic crowd favorite is “Anchor Down.” Simply hold up your VU hand sign, go “ahhhhhhh,” and then bring your hand down as you shout, “ANCHOR DOWN!” 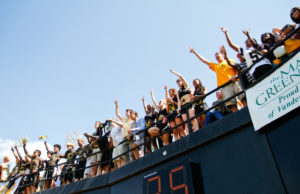 Trust me, after every victory, there will be plenty of opportunities to celebrate with friends away from the stadium. There’s no reason to risk your health in a mob of thousands of fans when there are parties to attend later. Obviously, don’t drink if you’re under 21, but if this is how you want to celebrate our wins, go for it. 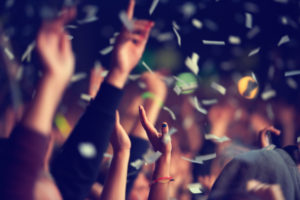 Go somewhere in Nashville to celebrate. Get a group of friends and go to Lonnie’s, or find a place you’ve never been to celebrate. We now all live near the downtown area of a busy city with an active night scene, so if you haven’t gotten off campus yet, go do it after the game. Just get out of the stadium. Don’t go on the field. Get out. 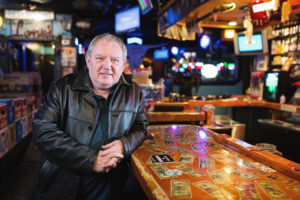 Surely it has been scientifically proven that the more fans there are wearing school colors, merchandise, and body paint, the higher a team’s chances of winning. I know you have some Vandy merch; we all got a free shirt. No excuses.

For most first-years, this will be our first game as students at an SEC school. Go crazy with it! Paint your face black and gold! Wear an obnoxious amount of school colors! Fold your syllabus into a paper hat if that’s the only thing you have that says “Vanderbilt” on it! Do it for the team. 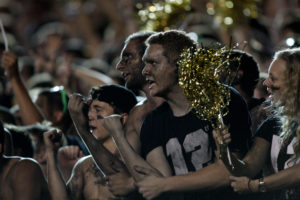 This one seems a little underwhelming, but trust me, nothing makes a team and its coaches prouder than when the fans get to their feet and applaud them. A win against South Carolina on Thursday would be extremely meaningful to the team, so show your respect whether they win or lose, and remember that once you enter that stadium, you represent Vanderbilt on a national stage. Keep it classy. 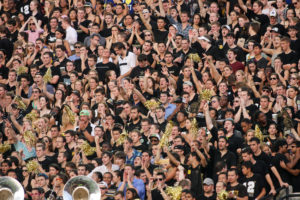 It’s football time on campus and the MCL team has all the info you need about the Anchor Dash and Kickoff Cookoff.

As a college student in Nashville, you will want to explore all the campus and city have to offer. Many college students find themselves with little extra money in their pockets. Here are the top 5 ways to spend that extra $5 you have lying around:

5. Grab a snack from Common Grounds

Common Grounds is a 24-hour coffee shop in the Commons Center with grab-n-go meals, snacks, and beverages. If you ever need a late night snack or a coffee break while studying, Common Grounds is the most convenient option. And if you don’t want to spend the extra $5 in your pocket, you can always use a meal swipe at Common Grounds to get an entree and two side items. 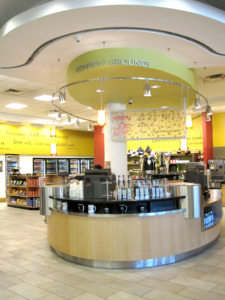 Luckily for all of us ice cream lovers there is a Ben & Jerry’s less than half a mile away from the Commons. In college, there are going to be good days and bad days, so when your BFF has an off day or a reason to celebrate spend your extra $5 to treat him or her to some ice cream. I’m sure he or she will return the favor later with your favorite flavor! 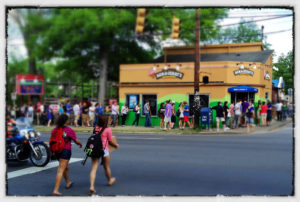 3. Wash your sheets for the first time

As gross as it sounds, many college students neglect the basic necessity of washing their sheets. In order to stay clean and prevent sickness, washing dorm room sheets is a must. So on a Sunday when you need a study break and have an extra $5, spend that money wisely and wash your sheets. At Vanderbilt, it is only $2.50 for a complete wash and dry cycle; hey, you can wash them twice! 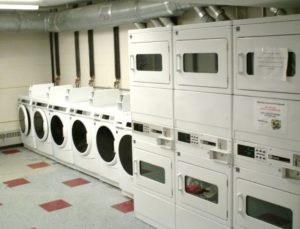 One of the best ways to relieve a little stress after a long day of studying is yoga. Good News: The Shakti Power Yoga Studio is less than a mile from campus and offers $5 drop-in yoga classes. The classes focus on building strength, improving flexibility, magnifying your body’s energy, and calming your mind by focusing on the present moment and breath. The class schedule can be found on the Shakti Power Yoga Studio website. 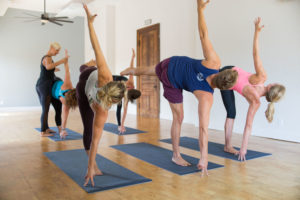 The Paddle at Vanderbilt University offers entrance to many art exhibits for only $4-$6. This can be a great way to explore some of the incredible art Nashville has to offer. You can find more details about local exhibits at https://www.mc.vanderbilt.edu/medschool/paddle/entertainment/weekend_pagelet.html#art 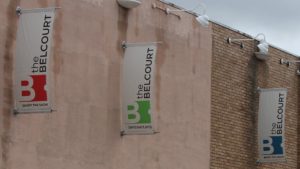 MyCommonsLife presents your flashcast for Monday, August 29, 2016, featuring important bits of info you need for the week ahead.

MyCommonsLife presents the Flashcast for Friday, August 26th, featuring a preview of events happening on and around The Commons this weekend.

MyCommonsLife presents this informative flash cast for the week of August 24. Featuring info on how to survive your first week of classes.

Vandy Vans are the shuttle system around the Vanderbilt Campus. There are three routes: 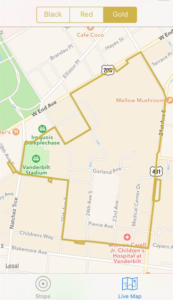 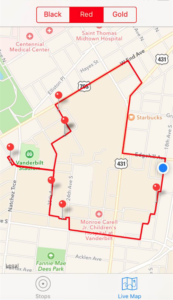 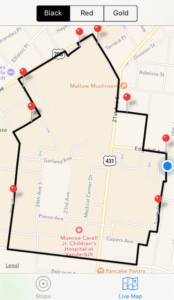 Download the app to see the van schedule, get notifications when vans are nearby, and see live versions of the map! 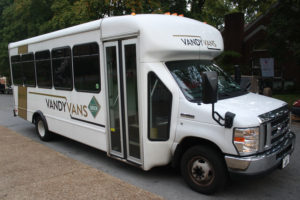 #2: Nashville MTA
One of the best ways to get off campus is the Nashville bus system. With more than 10 stops within walking distance from the Commons and even more stops surrounding the main campus, riding on the buses is incredibly easy. The buses run from 6 AM to 11 PM and can take you anywhere from the Grand Ole Opry to the airport to downtown live music venues. There’s also a free app for your Smartphone to help you plan your next trip. Rides are free with your commodore card.

Uber is a popular and affordable way to get around—especially now that you can pay for rides with your Commodore Card! Download the Uber app, register for an account, then go to “Payment” to link your card. 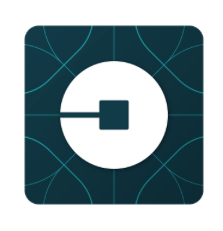 If biking is more your speed, you can rent a bike through VanderBIKES! The price ranges from $90-$150 a semester OR $150-$250 a year, depending on your bike of choice, and comes with free maintenance and u-lock. Click here for more information. 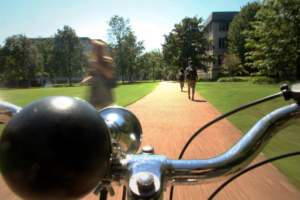 #5: Walking
Last but not least, the simplest way to get around is to walk. It’s free and there are so many interesting places within a few miles of campus. The closest attraction is Centennial Park. It’s located right across the street from the Vanderbilt bookstore and features a full-scale replica of the Parthenon. The park also hosts local musicians every Tuesday, Wednesday, and Thursday. In addition Hillsboro Village and the historic Belmont Mansion are within walking distance of the school. Of course the Vanderbilt football stadium and basketball gymnasium are right off campus, so it’s easy to walk over and support your Commodores!