Sunday afternoon, I decided I needed to change my sheets. It wasn’t for any particularly “major” reason, only because I have this really weird habit: I have to shower before bed. On Saturday, I came back to my room far too tired to shower, thus getting straight into bed, and becoming slightly abhorred in the morning when I realized what I’d done. Dramatic?  Yes. But I changed my sheets anyway.

As I went to do so, I first put on my comforter the wrong way. How did I know? Well, I thought to myself, “The tag has to go in the bottom left corner.” As this thought popped into my mind, and I completed (in my very precise way) making my bed, I thought of one person: Monica Geller.

Now, I spent my summer as I think all people should … rewatching “Friends.” So my comforter immediately reminded me of Monica trying to explain to Richard how the bed should correctly be made. (PS: If you haven’t watched Friends by now, get on it. And spoilers no longer apply because this is textbook stuff.)

But, besides the comforter scene, I began thinking I am more similar to Monica than not. I definitely have my Rachel moments, and even some Phoebe moments, too. But as I sat to examine my personal tendencies, the “Monica in me” started appearing more and more.

How? Well, for starters, there’s the organizing trait that is central to Monica. As I began to break this down, I remembered two extremely clear examples:

Ex #2 — At Peddie (my HS), my co-president and I were in charge of running Student Council. Over the summer, I made the new leaders a binder full of absolutely everything we did last year. I mean, it was immaculate. Every speech, alumni letter, spreadsheet, supplies list, meeting plan, and every prom document. All color coded, all with notes at the beginning of each chapter, and of course with a cross-referenced Table of Contents. Realizing this, I remembered two scenes: the one (haha) where Monica organizes all of her pictures, and the one with the wedding book. Comparatively … mine vs. hers:

Ex #3 — The second example made me laugh out loud. I was starting to get scared… See for yourself: 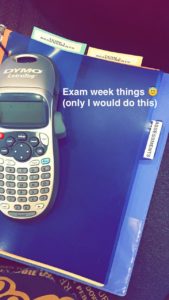 After the binder, and the label maker, I couldn’t stop drawing the connections.

Ex #4 — I was reminded of an event at Peddie called “Head’s Day,” which is essentially like a field day. A ton of games, four teams, and big competition. Prior to Head’s Day, my best friend Ellen and I had discovered during a dorm activity one night that we were incredibly good at playing the game “Head’s Up.” And, since I was on Student Council, I had this game added to the roster for Head’s Day … specifically having it added thinking Ellen and I would win …

When it came time to play, we were not doing as well as usual. With only a few seconds left for me to guess the last word, Ellen said “you eat with it!!” Naturally, I began with “fork,” then “knife,” and because she couldn’t explain that it was round, or you ate soup with it, or anything remotely helpful, we lost the word, and ultimately the game.

While this whole process occurred, one of the school photographers took this (incredibly unflattering) photo of me. 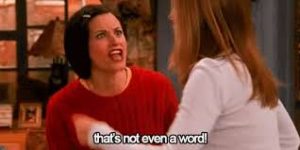 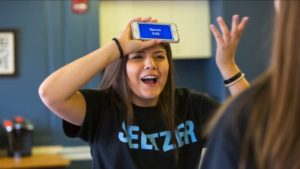 Ex #5 — This points to another similarity — my tendency to be potentially over-competitive.

For example, during FH preseason at Peddie every year, there was always a scavenger hunt. The first three years, I’d done some crazy things to try to win: put on 25 t-shirts, showered with clothes on, etc. But Senior year? I was in it to win it. I had ziplock bags ready to place 30 individual turf pieces in, I ate a gogo-squeeze in 4 seconds, and I even asked a Sophomore out on a date. All for the love of the game. (We won, btw. Great victory.)

And while I don’t have any photo evidence this, Monica does. It is a known fact that she’s the competitive friend. Example? The Geller Cup. 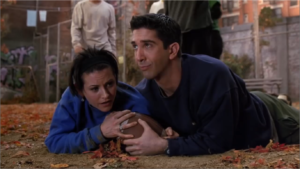 PS: How East House needs to be for the Commons Cup ….

Ex #6 — When I thought of this example, it was particularly funny, because it happened once again last night. I walked into my room to see my friend Hannah sitting at my desk. My roommate, however was not in the room. I said, “oh hi … the only person in my room doesn’t actually live here!” I was not bothered by this at all, in fact, it used to happen all the time at Peddie, too. Before I lived with Ellen during Senior year, she was always in my room even when I wasn’t. But the funny part was that this happens quite frequently to Monica, too:

As I thought about the the first five examples, I was almost scared … Sometimes people think Monica is crazy for these things. She’s SO organized, SO precise, SO competitive, and SO loves to be overseeing everything. But then I thought about how all of these things make her who she is, and, make me who I am, too. And, when I thought of the 6th example, it made me realize how much Monica really loves her friends.

Monica is always the hostess, true. But more than that, she lets Rachel move in with her after years of not talking, she eats Rachel’s terrible Thanksgiving “dessert” that actually has meat in it, she doesn’t tell Joey the true meaning of the word “abysmal,” etc, etc. Monica loves her friends hard. And I couldn’t think of any better characteristic than that. 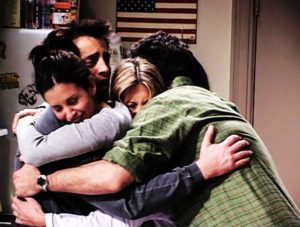 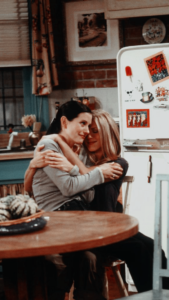