You might think this is a sequence to a line dance, and you’re right, it is… It’s simply two eight counts of classic line dance steps, probably seeming elementary to the dancers out there, and impossible to those with two left feet. But those two eight counts were the catalyst to some of the most fun I’ve ever had.

If someone asked me out of the blue to go line dancing, I probably would’ve refused… Look crazy tripping over my own feet?? And other people’s feet??… No thanks… 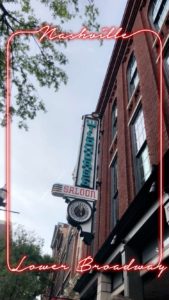 But the place and time were already set. 120 2nd Ave N, The Wildhorse Saloon. Thursday, August 16th, 6pm. The Media Immersion Pre-Orientation was sending us line dancing, and there was no backing out.

We opened the door to the huge bar / saloon and immediately heard the band “Cross Atlantic.” This guy and girl duo was crazy good, and their “New Nashville” sound was the perfect backdrop for our long-awaited BBQ dinner.

And then it was time. Cross Atlantic left the stage, and a new woman appeared at the front. “Y’all come on down to the bottom floor for our Line Dance Lesson!”

Immediately, Sarah, Adam, Bryce & myself were sprinting down the four flights of stairs, and subsequently pushing ourselves through the crowd to make it onto the floor. Though hesitant at first, once we were there, we knew we had to dance.  I simply couldn’t disappoint the child in me who spent years dancing to Hannah Montana’s “Hoedown Throwdown.” 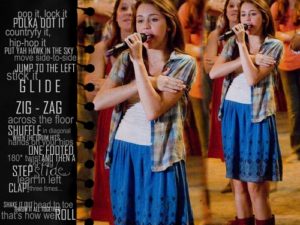 But, “pop it, lock it, polka dot it” failed me this time…  This was the big leagues, and it was time to step up (with the right foot first, of course).

So we listened, we watched, we followed in line (literally), and eventually we caught the hang of it. We did the eight counts faster and faster, and suddenly we were line dancing our way through all of Sam Hunt’s “House Party” while screaming the words, too. This was the definition of dancing like no one was watching, and singing like no one was listening… except everyone was watching… and everyone was listening.

But it didn’t matter. We were line dancing at a saloon in Nashville like it was nobody’s business… and man, we were having fun. That’s what mattered.

So, the small town girl in me that did not at all want to line dance in this new, crazy, and country city was gone by the end of the night, and all it took was two eight counts.

Somewhere in the middle of screaming Sam Hunt, I realized this principle can apply to more things in our first few months here; to begin overcoming the nerves of trying new things all we have to do is break them down: