Based on an interview with Valerie Kraft.

“Okay, everything revolves around food. Like everything. You think about every college event; How do they get you to come? There’s gonna be food. It’s a very big part of american culture, because we’re Americans, it’s what we do.”

What is Celiac disease?

“So Celiac, (is not) an allergy but it’s … an autoimmune disorder, and if I eat the things (gluten), I don’t have an allergic reaction; I have an autoimmune reaction which means my body just, like, kills itself. And because gluten is what I can’t eat a lot of times people just think ~ “trendy”~ but it’s not. You know on one hand i’m really grateful to those people because that’s why i can go to munchie mart and get gluten free chicken nuggets from the freezer.. and it’s like thank y’all for making a market for this…  but it’s really annoying when you have to tell people that no, this is really serious and you have to take precautions and they’re like “yeah okay”…….. Like no, please. 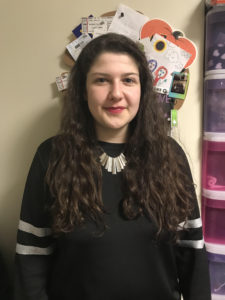 “You can say that my whole disease is a hoax, like people come and try to tell me their conspiracy theories… I’m grateful that that’s all it takes; it doesn’t take medicine or shots, you know what I mean?

You don’t realize how terrible the world is for people without allergies until you are one.”

You don’t realize how terrible labeling laws are, or how everything is food related, and how everything has gluten in it .. people think bread, but that also means no licorice, no licking envelopes, you have to be careful with your shampoo, and your makeup, and lotion and pickle juice, and drinks, and lemonade, and coffee… it’s literally everything.

Effect Beyond the Food.

“Till this day it try to, like, tape some candy to their (a friend’s) door or say have a nice day because people have gone out of their way to do nice things for me like that in life. You don’t really know all the details behind a person’s life… you just don’t know! And so i figured out that when someone’s “vagueing” about something going on in life, it’s usually a lot worse than they let on, and so I always try to just do something nice for people… because how many times has someone done something really little for you and still think about it to this day… the thing with the whole dietary restriction is you always have to be thinking about these sort of things… when you get good at picking on who else has dietary restrictions… you get good at picking up on a lot of things.

…Celiac and food allergies are a lot more common than you think. We’re more than that, we’re not just a food allergy… like you think of your friend, you think of doing social things and oh can they do that? …and a lot of times you’re hesitant to invite us to things, cuz we can’t eat… but we’re your friend before we’re — the allergy kid– so just invite us, and we’ll do what’s best for us… if we come and we get water, or the one allergy safe option of lettuce.

A lot of the time it’s easy for people to get into the *gasp you can’t eat thisss?!?!. We have allergies but we’re, like, y’all.”

Valerie Kraft (class 2021) is a leader for teen Celiac activists throughout country. She is also a self-proclaimed adrenaline junky, caretaker for friends, and advocate.