“I moved here from Atlanta for a temp job. Mr. Seigenthaler, who was the founder, had his assistant quit and did not give any notice, so they asked me to come and work for him temporarily. We clicked, so I became his assistant for eleven years. ”

“The most rewarding part [of my experience] was getting to know him and work with him all these years. He was an amazing, very kind, and humble man who was very much a patriot and in touch with the nation and all that was going on.”

“When he died, I became the center administrator, and my passion is really continuing Mr. Seigenthaler’s legacy; he did so much for this city, this nation, for people in need, for the underdogs, and my passion is that his legacy continue and that people will know him and know what he did.” 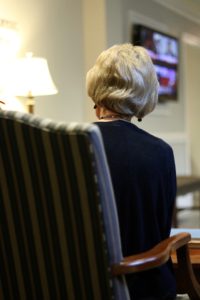 The John Seigenthaler Center, while located on Vanderbilt’s campus, in an independent entity. This center, also known as the First Amendment Center, was meant to both celebrate and encourage understanding of the founding values of the United States and Seigenthaler’s work.