Linh Vu is a Vietnamese freshman. She comes from Hanoi, the second largest city in Vietnam, where the traffic jam is totally insane but has a variety of food. She is extremely passionate about media and how it can change and expand people’s perspectives. Let’s get to know more about her. 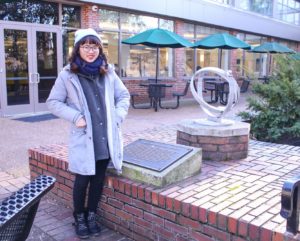 I know you are interested in Cinema and Media Arts, can you tell us why?

Growing up with my grandpa’s black and white films he made, I got engaged in movies since childhood. What impressed me was not the technology used back then, but the ability of movies to convey messages that still apply to the modern world. Movies have ignited my interest in working towards a strong, liberal society and in the way it alters people’s views on certain concepts and opinions in life.

I used to be oblivious about feminism and its importance for women; however, documentary films “India’s Daughter” challenged me to learn about the true experiences of women’s repression and pursuit of equality around the world. Exploring film at Vanderbilt by learning from talented film students and outstanding professors would allow me to deliver my own messages as a feminist, thereby challenging stereotypes and repressive social norms. I want to make my own documentary films to raise awareness about issues like sex trafficking in third world countries and the LGBT movement in Vietnam. I believe, by learning professional film-making, I could add a creative dimension to my intended career in broadcast media, finding new ways to shed light on injustice and promote equality across the globe. 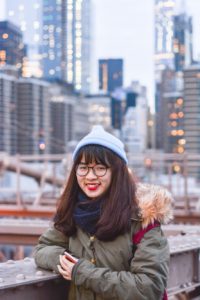 What clubs are you involved on campus that concerns with your interests?

I’m involved in Vanderbilt Hustler, Vanderbilt Television News, My Commons Life and Vanderbilt University Theatre. I used to work as a photographer and a video editor. I’m currently working on a project interviewing professors to improve her photo-taking and video-editing skills. For this project, I ask professors at Vanderbilt about their academic interests, advices, hobbies and other aspects students wish to know about them. This project will be featured on My Commons Life soon!

Is there a very impressive event or class during last semester for you?

Professor Ben Tran’s first year writing seminar about The Vietnam War has huge impact on me. Born and raised in the Vietnam, I have always taken pride in my country’s legacy and my ancestors’ struggle to gain independence and freedom. For a long time, my knowledge was limited by ambiguous datas of years, historical figures and visual war images delivered by Vietnamese teachers. Those lessons denounced war crimes, displayed the hardships of Vietnamese during the Second Indochina War, and blamed United States for all problems. However, I underestimated impact of war on people from different races, cultures and beliefs. As I learn my country’s history in another country, I started to look at this period from a broader picture that the North and South Vietnam were actually divided and used as pawns in the chessboard played by two foreign superpowers—the United States and Soviet Union—or two binary ideologies—Capitalism and Communism.

What is your favorite place to study on campus?

I would say my top choices are the Baseball Lounge in Sarratt and Vanderbilt Law Library. The reasons are quite simple. The Baseball Lounge is the ideal location for me to get wonderful food at Local Java or Rand whenever I am hungry, while the Law Library is an extremely quiet place with a lot of serious graduate students focusing on their works, which too makes me feel concentrated on my study.