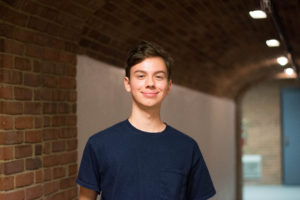 (image from the hustler)

“I came into college thinking that my passion was education but upon further thought I realize I didn’t want to teach and I didn’t really know what else to do with that, so I’m kind of at a point where I just want to explore, and that’s all I really feel like is certain at this point.

So right now I’m taking Neuroscience, ugh, a computer science class, a class called mind and brain which is about cognitive neuroscience–I did not really know that getting into it, but I thought it was cool so I stayed– the intro seminar for Peabody scholars which is on creativity and an English class on representative american writers… and intro French, because I took it in high school and I forgot everything despite having been in it for 5 years…”

Honestly I would take classes in pretty much everything we have here with the exception of maybe like, really theoretical math classes and anything in business, (it just) isn’t that interesting to me. But otherwise, all of the sciences, like chemistry, biology and physics were just so interesting to me in high school…I also really, want to take classes in philosophy, I took intro to ethics last semester, and it was easily my favorite class, with my class on justice just behind it. And neither of those pertain to anything I’m going to show up with on my diploma when I leave here, but they were just so, cool.

I like thinking about how different social structures work, and what it means to be human, and all these really deep questions that I feel like a lot of students here don’t really feel like they have the time to pause and think about, because they’re too busy trying to go down a specific path toward a career, or they’ve managed to isolate one thing that they’re really passionate about, that they can just pursue.

I’m really fortunate that as a cognitive studies major with a good number of AP credits transferring in that I have just a bunch of freedom that I can just explore. I understand that not everyone is going to be able to do the same sort of random class taking that I am lucky enough to be able to do, especially if they’re pre-med, and want to do a double major in whatever crazy stuff people are up to around here.

But, when they get the chance, I think it’s really mind-opening to just be able to take a class that you wouldn’t otherwise be studying and just give you a moment to take your mind away from the very specific path that you might have chosen… you’re, sort of forced to choose when you choose a major, and actually explore the broader intellectual world around you. There’s a unique opportunity to do that at college that you’re gonna struggle to find anywhere else, especially for the time to do.”