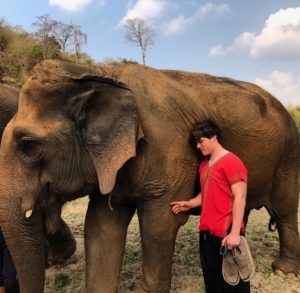 This is Charlie Fabricant.

“Going into freshmen year of highs school that summer, I went with a teen tour backpacking in northern California. It’s the kinda thing where you have no phones for three weeks, you got 3 showers in 3 weeks which is fun because everyone smelled bad (Charlie giggles), but I saw some absolute beautiful things, like we woke up at 4am to summit a mountain at sunrise, and we went hiking for miles along this hidden beach untouched by people, and I grew up like on the east coast less than a mile from the beach so I spent a lot of time at the beach, but there was something totally different about this natural beach, with sea lions lying about, this beautiful forest above the cliff, and something clicked at that moment, like, wow, nature’s beautiful. There have been some gorgeous pieces of human art too, but there’s something amazing about the natural world and how magnificent it can be even though it just like kinda formed and nobody really designed it, (its) just how it is.”

Practice what you Preach

“Some people are absolutely amazing with it, like they do every single thing they can… I’m still like a normal person-that’s the wrong way to say it… the average consumer who tries to take all the little steps. I try to take quick showers and not use too much hot water.. Or if I see bottle pick it up and put it in the recycling bin, research…. To make sure the factory is sustainable.”

Companies and the Enviroment

“This little company I found based out of Philadelphia thats really cool, the company called united by blue, and their whole…mission is for every product they sell, they take a pound out of a waterway.”